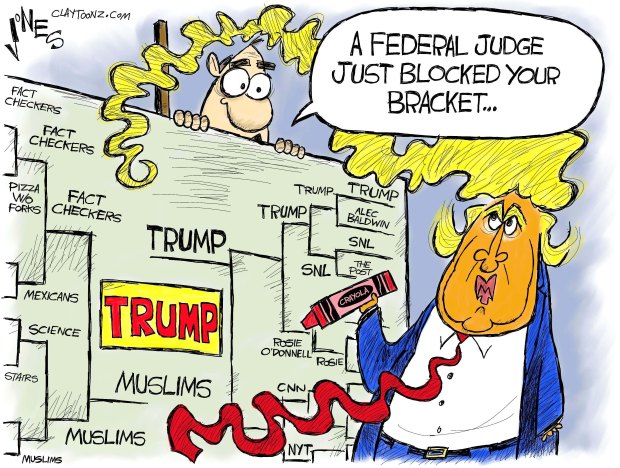 No matter how much Trump and his band of goons adjust and modify their bigotry, federal courts continue to deny them from making their hatred U.S. law.

After No. 45’s first ban on Muslims from select countries was knocked down by federal courts, he went back to the drawing board. This time he put a smiley face on it.

His first argument for the travel ban was that we’re facing such a dangerous threat from Muslims that the ban can’t wait. Then he made the ban wait so it wouldn’t distract from a speech where he used coherent sentences.

His second argument is that it’s NOT a ban against Muslims. He and his people are using this argument despite the fact Rudy Giuliani said Trump called him and asked how they can create a ban on Muslims and do it legally, and that Trump said he was calling for a “ban on Muslims entering the United States,” and that other time where he said “Islam hated the United States.”

Hawaii saw Trump’s newest ban and instead of saying “mahalo” they said “aloha.” Aloha as in goodbye. While English speakers use “aloha” to say hello and goodbye, in the Hawaiian language it means peace, affection, compassion, and mercy. Each of those components are missing from Trump’s Muslim ban so it’s no wonder Hawaii’s attorney general took it to court, and the court put a temporary restraining order on it.

Trump said the judge was “overreaching,” and 45 is a man who knows all about reaching and grabbing the wrong places.

It’s no wonder Hawaii would want to reject a ban on a class of people. Japanese-Americans make up around 30% of the state’s population and they’re well aware of this nation’s history of reactionary executive orders that discriminate against certain groups of people. During World War II the government decided that people of Japanese descent in the United States could not be trusted, so they interned them in camps like prisoners of war. Men, women, and children were locked behind fences. Homes and businesses were lost. It has become one of the greatest failings of the United States and it shouldn’t be forgotten.

Hawaii is rejecting Trump’s bigotry. I stand with Hawaii, my former home for a year.