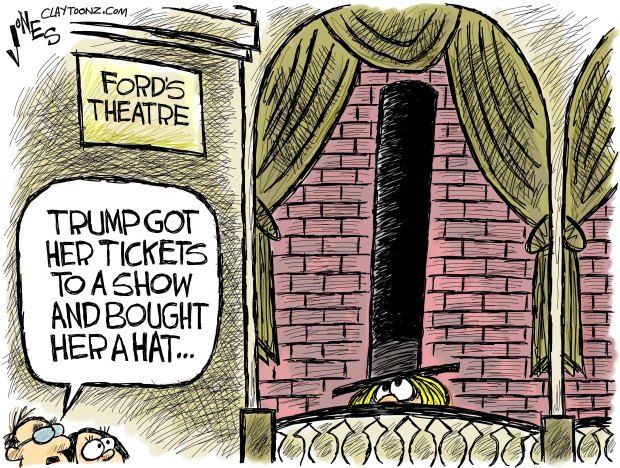 Trump committed a faux pas and did not mean to say “2nd Amendment people” could stop Hillary Clinton from appointing a Supreme Court justice after she’s elected president. He meant to say “titties.”

Trump has hinted to his gun toting supporters that they can shoot Hillary Clinton if she wins the election. Remember when we thought it was ridiculous when he started a debate talking about his penis? Maybe someone should shoot that. They make really tiny guns, don’t they?

Trump claims Hillary Clinton wants to abolish the Second Amendment and at a rally in North Carolina Tuesday he said “By the way, if she gets to pick her judges, nothing you can do, folks. Although the Second Amendment people — maybe there is, I don’t know.” With the outrage of calling for the death of his political opponent everyone has glossed over the lie that Clinton wants to take everyone’s guns away.

How many times has Trump made a statement that his supporters had to explain away, and then a day later Trump attempts to correct the record without apologizing? He wasn’t talking about periods when he said Megyn Kelly had “blood coming out of her whatever,” he didn’t call Carly Fiorina and Heidi Cruz ugly, he didn’t mock a disabled reporter, he’s never encouraged support from white supremacists, and he’s never called for his supporters to beat up protesters.

Trump’s supporters hate Hillary Clinton and believe the narrative she’s a liar. They say they love Trump because he speaks the truth but he’s really not serious when he makes outrageous comments. Seriously, why do these people have access to guns?

Trump supporters are making excuses for Trump’s dog whistle to shoot Hillary. It’s weird they will distort, take out of context and give new meanings to Clinton’s statement “what difference does it make” and then try to say Trump doesn’t mean “shoot Hillary” when he says “Second Amendment People” can do something about Hillary.

A few years ago Democratic U.S. Representative Gabby Giffords of Arizona was shot in the head by Jared Lee Loughner after Sarah Palin published a bulls eye on her district. 14 other people were injured and six more were killed.

Last year an anti-abortion activists group released a bunch of videos manipulated to look like Planned Parenthood was selling the body parts from dead babies. One of their fans who probably had a subscription to their newsletter, Robert Lewis Dear, took it upon himself to shoot up a clinic in Colorado Springs, killing three people and injuring nine more, and later in court he claimed he was “a warrior for the babies.”

In 1994 president Bill Clinton’s approval ratings were plummeting and the Republicans seized the momentum with an anti-government platform, retook the House and Senate, and convinced their supporters the government was clamping down on them. The fever swelled until April, 1995 when Timothy McVeigh bombed the Alfred P. Murrah building in Oklahoma City killing 169 people and injuring 680 more.

They especially matter when you’re talking to a base of uneducated people who are very misinformed, love conspiracy theories, and are more prone to act than think. Who do you think follows and supports Donald Trump? Trump has already hosted a convention where his speakers were yelling for Hillary Clinton to go to prison. Remember, Trump says he loves the uneducated.

Trump has said the system is rigged, and that the election is manipulated if he doesn’t win. Now he’s saying if he loses his supporters should shoot Clinton. This is a dog whistle that everyone can hear. I hope the Secret Service and FBI hears it because we don’t know what kind of dogs Trump has out there.