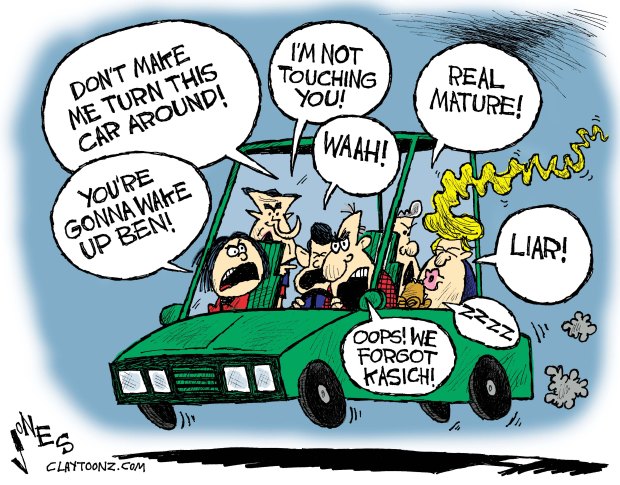 I hate the Clown Car analogy that’s been tossed around to describe the Republican candidates for president. It’s not that I disagree with the description. It’s that it’s a lazy analogy and not creative at all. If Chris Matthews uses it then you shouldn’t (and it’s an analogy he repeats every day). So I may be the only American editorial cartoonist (who’s not a conservative hacker) who has not used that analogy. But after seeing the last Republican debate (I didn’t watch all of it, just the hightlights), it did remind me of family road trips from Hell.

Sorry if this brings up bad memories. I was raised the youngest and had an older brother and sister so I probably can’t complain about them being the pain in the butt…it was me. I also have a younger sister and brother but I wasn’t raised with them. Long story.

I never intended to insert Kasich into this cartoon. As I was lettering the text I thought how funny it would be if he was left at a rest stop (probably in Ohio). There’s always that kid without any charisma that you forget, sometimes because the other kids are competing for attention. At the debate before the New Hampshire primary Kasich was forgotten. It took Chris Christie to remind the moderators that they forgot to introduce Governor Blah.